If you still see this message after updating your profile, please email our support team
Helpdesk@McMahonmed.comavceeaecrz

Charlotte, N.C.—Surgeons around the world are applying a robotic surgery platform to increasingly complex procedures and documenting their experiences. But few reports involve esophagectomy, and those that do usually include only a small number of patients.

At the 2019 Southeastern Surgical Congress, Alex Rosemurgy, MD, presented new research on robotic transhiatal esophagectomy (rTHE) that suggests the robotic approach is safe with risks that would be deemed acceptable in the complicated population of patients with esophageal cancer. It is the largest series to date.

“Esophageal cancer is near epidemic in the [United States], having increased sixfold in the last 30 years, largely due to the rise in adenocarcinoma, which has increased 54-fold,” said Dr. Rosemurgy, a professor at the University of Central Florida in Orlando, practicing at Advent Health in Tampa. “At the same time, the robotic platform has hit American surgery like a tsunami. Our goal was to evaluate our experience with rTHE with the hypothesis that our earlier experience would support further application of the robotic platform for rTHE,” he said.

Over a 28-month period, Dr. Rosemurgy and his colleagues prospectively collected data on 45 patients undergoing rTHE. Most of the patients received neoadjuvant chemotherapy, and adenocarcinoma was the underlying pathology in 41 patients (91%). 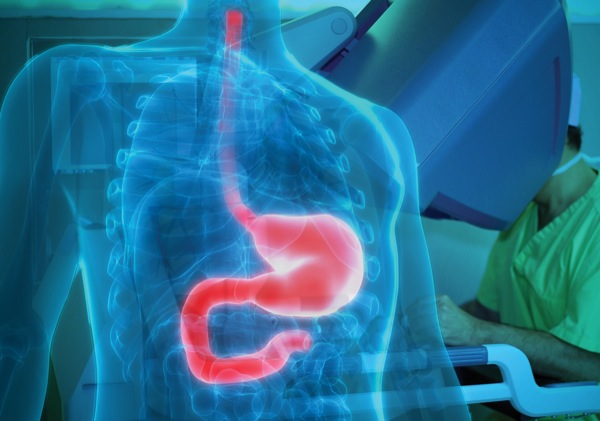 The average age was 67 years, with nearly three-fourths older than 65 years of age; the patients’ mean body mass index was 26 kg/m2, with 56% being overweight or obese; and most had an ASA physical status of III.

Dr. Rosemurgy and his colleagues perform rTHE with four robotic arms in the right upper quadrant using a 5-mm trocar for the insufflation device and liver retractor, and place a gel port through a 2- to 3-cm incision for specimen extraction by the bedside surgeon. Most of the operations in this series were done with a da Vinci Xi robotic platform (Intuitive Surgical).

“It’s a two-team operation with one surgeon controlling the abdominal/mediastinal portion robotically, and the other surgeon is at the neck dividing the cervical esophagus with a stapler and reconstructing an esophageal gastrostomy. One drain is placed. The patients also get a pyloromyotomy, which is done robotically during the abdominal portion of the procedure,” Dr. Rosemurgy said.

Four patients—the first, sixth, 16th and 19th—were converted to open. These conversions occurred in a patient with dense adhesions and mesh from a prior hernia repair, a patient with a previous perforation at the tumor site, a patient with severe inflammation around an esophageal stent, and a patient who had undergone a prior failed attempt at resection.

The median blood loss was 200 mL, decreasing progressively with experience; 22 patients (49%) received thoracostomy tubes; and the average operating time was 324 minutes. One patient died of acute myocardial infarction four days after the operation, despite having been cleared for surgery. The median postoperative length of stay was eight days.

“Respiratory issues were the most problematic, and were due mostly to a strong smoking history,” Dr. Rosemurgy said; those patients were temporarily intubated. “The surgical site infections, while notable in frequency, were not severe. One patient developed a stricture at the cervical anastomosis that was resolved by serial dilations.”

The findings—that rTHE is associated with low blood loss, low mortality and few conversions to open surgery—support the researchers’ hypothesis. “I feel very strongly that the robotic platform is going to be a fixture in the future for complex general surgery, and that widespread adoption will occur,” Dr. Rosemurgy said.

Emmanuel Zervos, MD, a professor of surgery at East Carolina University and the executive director at Vidant Cancer Care, in Greenville, N.C., said the series could best be described as a feasibility study. “And in that regard, the results are quite impressive,” he said. He credited Dr. Rosemurgy and his colleagues for pushing the minimally invasive envelope and challenging long-standing dogma, but he did have a few questions, one of which was rather philosophical.

Dr. Zervos said Mark Orringer, MD, the surgeon who made minimally invasive modifications to thoracic operations accessible to general surgeons in the 1980s, recently gave grand rounds at his institution, where he opined that the modifications are actually regressive.

“These modifications have moved the anastomosis away from the neck and back into the mediastinum, which is the exact configuration THE was conceived to eliminate. Was this your experience with the robotic approach, and are you using any adjuncts to minimize the dreaded complications that occur when this anastomosis resides in the mediastinum?”

Dr. Rosemurgy acknowledged that location of the anastomosis remains an emotional debate for many. “But I just like this approach better, and we don’t have notable complications—and a leak in the chest is a notable complication.” His and his teams’ anastomoses are all located in the neck, and they do not use any adjuncts.

William Richards, MD, a professor and the chair of surgery at the University of South Alabama in Mobile, agrees with Dr. Rosemurgy that the robot will revolutionize surgeons’ ability to perform complex minimally invasive procedures. “But to what do you attribute these excellent results? Is it the increased visualization, or the ability to dissect high up in the mediastinum?”

Dr. Rosemurgy had no answer. “The other day we did a 10-hour robotic pancreaticoduodenectomy on an 85-year-old woman. This doesn’t make any sense, but on post-op day 1 she was up walking around, and was discharged on post-op day 4. Patients do remarkably well, and I don’t have an explanation for it. It must be the avoidance of the incision; I don’t know what else to say.”