If you still see this message after updating your profile, please email our support team
Helpdesk@McMahonmed.com
cfqqcuqwtfxeadcc

In the search for new antimicrobial agents to fight superbugs, some researchers have been looking backward, reviving a century-old therapy that hasn’t been used much in decades except in parts of Eastern Europe and the former Soviet Union.

Bacteriophages are naturally occurring viruses that prey on bacteria wherever they are found, including in soil, seawater, the gut and sewage. They can replicate within a target bacterium and blow it up, killing bacterial cells while leaving nearby structures unharmed. Bacteriophages were used in humans for the first time in 1919 in France and had a heyday in the 1920s and 30s, said Steffanie Strathdee, PhD, an infectious diseases epidemiologist and the associate dean of global health sciences at the University of California San Diego (UCSD) School of Medicine. But after the discovery of penicillin, bacteriophages fell out of favor in Western medicine.

Dr. Strathdee, who witnessed firsthand the power of phage therapy, believes that resurrecting the therapy could be a viable treatment option for panresistant organisms. Dr. Strathdee and her husband, Tom Patterson, PhD, were vacationing in Egypt in 2015 when he became violently ill. When he vomited all night, the couple originally suspected he had food poisoning. Local doctors diagnosed pancreatitis caused by a gallstone. But after he worsened and was medevacked to Frankfurt, Germany, doctors found a giant abscess in his abdomen caused by Acinetobacter baumannii. The organism, nicknamed “Iraqibacter” because of the large percentage of U.S. veterans returning from the Middle East with it, was No. 1 on the World Health Organization’s list of the 12 most dangerous superbugs in 2017.

Dr. Patterson’s condition continued to decline, and he was medevacked again to UCSD. With Dr. Patterson comatose and in organ failure, Dr. Strathdee scoured the literature for anything they hadn’t tried, coming across an obscure paper on bacteriophages. Robert “Chip” Schooley, MD, then the chief of the Division of Infectious Diseases at UCSD and Dr. Patterson’s doctor, agreed to try bacteriophage therapy if Dr. Strathdee could find phages that matched Dr. Patterson’s bacterial isolate. She sent emails out to phage researchers around the country describing her husband’s state, asking for help.

Researchers at Texas A&M University came to the rescue, and sourced phages from sewage that matched Dr. Patterson’s isolate. This first phage cocktail was purified and administered through abdominal catheters to Dr. Patterson’s abscesses. Two days later, they received from the Navy Medical Research Unit in Frederick, Md., phages sourced from the bilges of ships and sewage treatment facilities that also matched the isolate. These were administered intravenously. Three days later, Dr. Patterson became conscious, lifted his head off the pillow, and kissed his daughter’s hand. He began his slow but steady recovery as the first person in the United States to receive IV phage therapy for a systemic superbug infection. The couple detailed their journey in their book, “The Perfect Predator,” released earlier this year and discussed the episode at the 2019 MAD-ID (Making a Difference in Infectious Diseases) meeting in Orlando, Fla.

In June 2018, UCSD started the Center for Innovative Phage Applications and Therapeutics, the first dedicated phage therapy center in North America. Drs. Strathdee and Schooley are the co-directors, and Dr. Schooley is planning a clinical trial of phage therapy, funded by the National Institute of Allergy and Infectious Diseases, in patients with cystic fibrosis chronically infected with and shedding Pseudomonas aeruginosa. 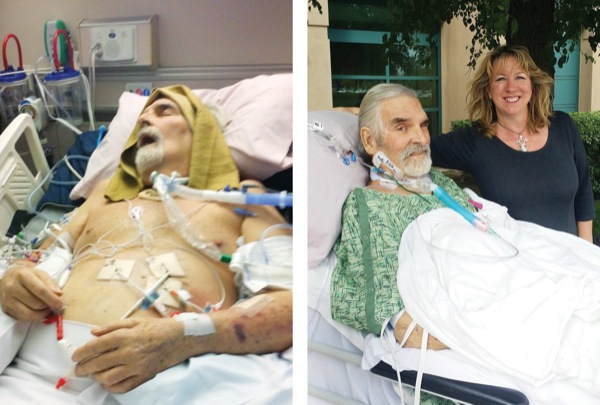 Tom Patterson, PhD, before and after phage therapy for a giant abdominal abcess caused by resistant Acinetobacter baumannii.

“Our goal is really to take phage to the next level,” Dr. Strathdee said, including conducting clinical trials and translational studies looking at dose, route of administration and pharmacokinetics/pharmacodynamics. “Our larger vision is to develop an open-source phage library that would be matched onto a giant library of superbugs, mounting a revolution on evolution.” Ideally, she said, there would be repositories on every continent so people could get phage cocktails to match specific bacterial isolates that come up as individual cases or outbreaks. Currently there are small phage libraries all over the world, she said, “but it’s like having hundreds of keys without knowing which locks they match to.” She and Drs. Patterson and Schooley discussed phage therapy at the closing plenary of IDWeek 2018.

“There were a lot of skeptics in the audience until we presented,” Dr. Strathdee said. “But now many are really excited. Infectious disease physicians have been increasingly seeing patients die of infections that used to be treatable. They really understand the need for alternatives and adjuncts to antibiotics because there’s few pharmaceutical companies working in this space.” With an estimated 10 million trillion (1031) phages on the planet, they can be environmentally sourced or genetically engineered for therapeutic applications, she said.

Mount Sinai Hospital has started a clinical trial of phage therapy in patients with Crohn’s disease who have adherent-invasive Escherichia coli (AIEC). AIEC, which affects about one-third of Crohn’s patients, is associated with worsening inflammation in the gastrointestinal tract. The trial, which has started recruiting up to 30 patients, is testing a collection of phages called EcoActive (Intralytix) that specifically target AIEC. In a randomized, double-blind, placebo-controlled trial, participants will be asked to drink a phage liquid or placebo twice daily for 15 days, while investigators collect blood and stool samples to evaluate presence of the phage and check for adverse effects up to six months later.

Most therapies available for Crohn’s try to suppress various components of the immune system, said principal investigator Robert Hirten, MD, an assistant professor of medicine at the Icahn School of Medicine and a gastroenterologist at the Susan and Leonard Feinstein Inflammatory Bowel Disease Clinical Center at Mount Sinai, in New York City.

But “there’s been growing interest that if we treat this bacteria, we could perhaps modify the course of disease or reduce inflammation in the future,” he said. “What’s really exciting is that for patients with inflammatory bowel disease, we’re potentially exploring a completely new treatment paradigm for the disease.”

Phages are just one avenue being pursued in the search for new antimicrobials. Other approaches include combining existing antibiotics, looking to plant components that naturally fight pathogens, immune-modulating therapies, antibody-based approaches, fecal transplants and probiotics, said Cornelius “Neil” J. Clancy, MD, an associate professor of medicine at the University of Pittsburgh and the chief of infectious diseases at the VA Pittsburgh Healthcare System. “It’s a pretty dynamic space right now,” he said.

A big challenge isn’t so much the antibiotic pipeline but what the marketplace will support, Dr. Clancy said. Newer drugs approved by the FDA since 2015 aren’t doing particularly well, he said, partly because physicians are keeping newer drugs in reserve for cases where they have no other options.

With current reimbursements based on number of units moved, there is a concern that drug companies contemplating entry into the space “will just decide it’s not worth the effort and uncertainty,” he said. One example is Achaogen. Even after getting its antibiotic plazomicin (Zemdri) approved by the FDA in June 2018, the company filed for bankruptcy this April and sold off its assets.

“There’s a feeling within the field that, inevitably, if the focus is going to be on the bug, and you’re going to take a classic antibiotic approach where you’re developing agents that inhibit or kill the bug, that the bug is going to figure a way around it and will ultimately develop resistance,” Dr. Clancy said. The focus has become looking for complementary approaches to use either in lieu of, or as a companion to, traditional antibiotics to try to minimize the impact of antibiotic resistance, he said: “For a lot of these, it’s early days, but there is a belief that we’ve got to do something more than just come up with classic drugs that are attacking the bacteria or fungus directly.”