If you still see this message after updating your profile, please email our support team
Helpdesk@McMahonmed.comeaqswwtxewcfsawqrabbcbwceqtx

In a large randomized trial comparing surgery with antibiotics in adults with appendicitis in the United States, antibiotics were noninferior based on 30-day health status.

Seven of 10 adults with appendicitis safely avoided appendectomy for 90 days by receiving a course of antibiotics, according to findings from the ongoing CODA (Comparison of the Outcomes of antibiotic Drugs and Appendectomy) trial.

“The way I interpret these results … antibiotics are reasonable for some patients, probably not all patients. It really helps to figure out what the patient wants when deciding on the different treatment options,” said co-principal investigator David Flum, MD, a professor and the associate chair of surgery at the University of Washington School of Medicine, in Seattle.

“(This) gives information to people so that, based on their characteristics, their preferences and their circumstances, including maybe COVID-19, they can figure out what’s right for them,” Dr. Flum added.

He presented the results at the 2020 American College of Surgeons’ Clinical Congress, which was held virtually. The study was published in The New England Journal of Medicine (2020 Oct 5. doi: 10.1056/NEJMoa2014320).

The results of the CODA trial have been highly anticipated since its launch in 2016. The trial is unusually large, with 1,552 adults who underwent randomization and a pragmatic design intended to accommodate the broad range of patients seen in real-world practice environments in the United States. Participants were ethnically diverse, with one-third whose primary language is Spanish. Unlike most other trials of antibiotics to treat appendicitis, patients with appendicoliths and severe disease were included.

The COVID-19 pandemic heightened the urgency for results from the trial, which completed enrollment just as the pandemic was declared. In some places in the United States, health care resources became strained, leading the American College of Surgeons to suggest that hospitals and surgical centers consider nonoperative management when applicable. The ACS noted the limited evidence suggesting that patients with uncomplicated appendicitis can be managed with IV antibiotics. Some patients also wanted an antibiotics-first strategy to avoid time in the hospital, Dr. Flum said.

Consequently, the CODA investigators decided to review outcomes from the first 90 days after randomization, a full year earlier than planned. 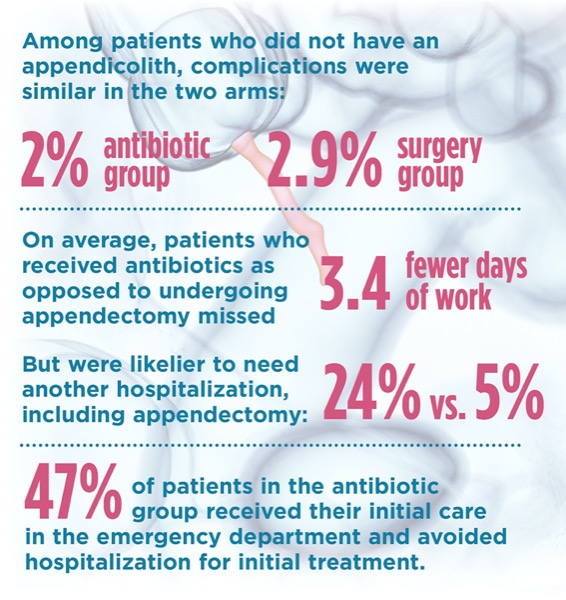 The researchers randomly assigned 776 patients each to undergo appendectomy or receive a 10-day course of antibiotics administered intravenously for the first 24 hours and then as pills on the remaining days. An appendicolith was found on imaging in 27% of the participants.

The primary outcome was patients’ health status 30 days after treatment using a measure of general health, the European Quality of Life-5 Dimensions (EQ-5D). Both treatment groups had similarly improved health on the EQ-5D, but each treatment showed advantages and disadvantages.

Patients who received antibiotics, on average, missed 3.4 fewer days of work than those undergoing appendectomy (5.3 vs. 8.7 days), but were likelier to need another hospitalization, including for an appendectomy (24% vs. 5%). In the antibiotic group, 47% of patients received their initial care in the emergency department and avoided hospitalization for initial treatment.

The study addressed a question that has long concerned surgeons: Are patients treated with antibiotics at greater risk for perforation and more surgical complications? The answer appears to be no unless they have an appendicolith, but it’s not perfectly clear. Patients in the antibiotic arm had lower rates of perforation overall (9% versus 15%), but it was an expected finding given that patients who were not operated on could not be assessed for perforation. When the analysis was limited to participants from either arm who underwent an appendectomy, perforation was nearly twice as frequent in the antibiotic group: 31% compared with 16%. However, again, this difference was attributable to the presence of an appendicolith. Overall, the rate of more extensive procedures like small-bowel or colon resection, reoperation or ileostomy was low and similar in the two groups.

“Once you control for the presence of an appendicolith, there was really no difference in the two groups in terms of the rates of complication. There’s really no reason to think that antibiotics allow a patient to progress to perforation,” said Katherine Fischkoff, MD, a surgeon at NewYork-Presbyterian/Columbia University Irving Medical Center, in New York City, one of the study authors who spoke at the ACS meeting.

Appendiceal neoplasms were identified in nine participants, who had a mean age of 47 years (range, 21-74 years). Of these, seven were in the appendectomy group and two in the antibiotic group who underwent appendectomy. Eight of the neoplasms were carcinomas and one was a mucocele.

At the beginning of the trial, researchers were concerned that increasing antibiotic management in the United States could lead to rare cancers of the appendix being missed, said Giana H. Davidson, MD, MPH, a study investigator and an associate professor of surgery at UW School of Medicine. They hope this trial will identify radiographic and patient characteristics that place someone in a higher risk category for these cancers. That information will help clinicians and patients make decisions about treatment options and what to monitor over time, she said. “Decision makers have to weigh the characteristics, the preferences and circumstances. We found one size doesn’t fit all,” Dr. Davidson said.

She noted that this report reflects early outcomes and the rate of appendectomy is likely to increase with longer follow-up.

The coronavirus infection itself may affect outcomes after surgery, although this was not studied in the CODA trial. In July, the international COVIDSURG Collaborative published a cohort study of 1,128 patients from 235 hospitals in 24 countries who had surgery between Jan. 1 and March 31, 2020, which showed postoperative pulmonary complications occurred in half of patients with preoperative SARS-CoV-2 infection. This comorbidity was associated with higher mortality (Lancet 2020;396[10243]:27-38).

In an editorial accompanying the COVID-19 trial results, Danny Jacobs, MD, a surgeon and the president of Oregon Health & Science University, in Portland, said he believes that all options must be discussed with a patient, but most providers would still recommend surgical treatment for uncomplicated appendicitis if laparoscopic appendectomy is available. That said, the pandemic will affect people’s decision making, he wrote.

“Circumstances do matter, and advantages of antibiotic treatment relative to surgery may be greater during the COVID-19 pandemic or other public health emergency in which operating room capacity and other resources are severely constrained,” Dr. Jacobs wrote.

It’s important to ensure that people, especially vulnerable populations, are not offered antibiotic therapy preferentially or without adequate education, he added.

The study has several limitations, including short follow-up. There was no standard technique for performing an operation or giving antibiotics, nor a standard indication for appendectomy for patients randomized to the antibiotic arm. In addition, women were underrepresented, accounting for one-third of participants. Men and women have a relatively equal chance of appendicitis.