If you still see this message after updating your profile, please email our support team
Helpdesk@McMahonmed.comtyvqswsu

More than $28,000 to remove an appendix, almost $94,000 for spinal surgery, over $500,000 for lifesaving dialysis treatment—these figures represent just a few of the unexpected medical bills patients have received, according to Kaiser Health News’ “Bill of the Month” column.

Concerns about surprise bills continue to mount as more people share their stories and as researchers dig into the extent of the problem.

“Surprise medical bills can be financially devastating,” said Karen Joynt Maddox, MD, an assistant professor at Washington University School of Medicine in St. Louis. “As a patient, you trust that if you have insurance you will be covered, but that is not how these scenarios are playing out.”

A surprise or balance bill can occur when a patient with health insurance unintentionally receives care from an out-of-network provider. When an insurance company and hospital or clinician don’t have a contract in place that sets payment rates, the clinician is considered “out-of-network” and the insurance company isn’t obligated to pay, Dr. Joynt Maddox explained. That often leaves patients responsible for the bill. 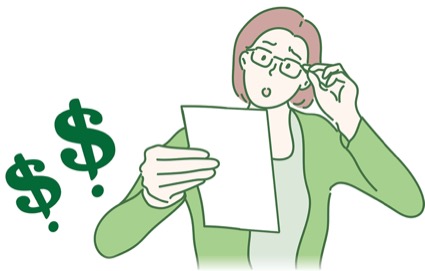 But how common are these types of charges? 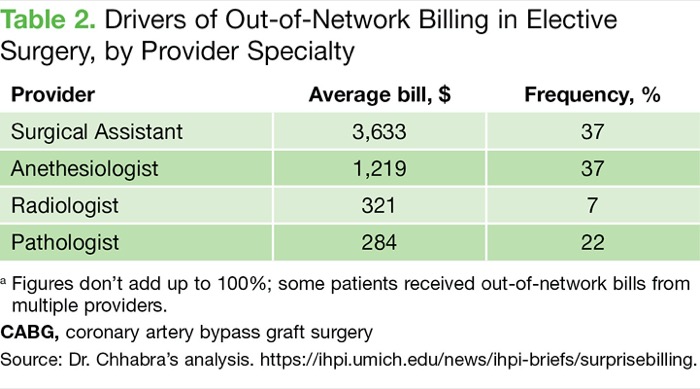 In an emergency or time-sensitive scenario, a patient will likely not have the ability to pick an in-network doctor or hospital. But what happens when patients do have time to shop for an in-network provider and facility?

Karan R. Chhabra, MD, who studies the affordability of surgical care at the University of Michigan, in Ann Arbor, wanted to find out.

Dr. Chhabra and his colleagues analyzed bills from almost 350,000 patients who had gone to in-network surgeons and facilities for elective operations (JAMA 2020;323[6]:538-547). What he found surprised him: 20% of patients received an out-of-network bill. The average bill came to $2,011.

In other words, “out-of-network bills occurred just as often for elective surgeries as they do for emergency visits,” Dr. Chhabra said.

Dr. Chhabra’s team could only estimate the potential surprise bill stemming from these out-of-network charges because the data did not specify what portion of the out-of-network bill insurers ultimately paid. Some insurers, for instance, may cover part of an out-of-network bill whereas others may leave patients on the hook for the full amount.

The most worrying finding, Dr. Chhabra said, was that these patients had chosen in-network providers and facilities. Dr. Chhabra’s team found that the largest proportions of cases of potential surprise medical bills cases involved out-of-network surgical assistants and anesthesiologists, but other providers, such as radiologists and pathologists, also had a part.

“So, in the elective surgery setting, patients are getting charged thousands of additional dollars from a clinician they didn’t have an opportunity to pick,” said Dr. Joynt Maddox, who is also the co-director of her university’s Center for Health Economics and Policy. “Although the issue of surprise medical bills is not new, our recognition of how common it is has grown recently.”

Regarding working toward a solution, for Dr. Chhabra, “my biggest takeaway for surgeons is to try, when possible, to work with a surgical assistant who is in the patient’s network.”

Patients, doctors, policymakers, even insurers and hospitals agree that consumers need to be protected from these surprise out-of-network bills.

The challenge, however, has been finding a solution at a national level that all parties can agree on. Surprise billing legislation currently being considered in Congress would ensure patients being treated at in-network hospitals pay in-network rates for bills under $750, even if an out-of-network provider was involved in their care. For bills of $750 and over, clinicians or insurers could opt to go through an arbitration process where an independent party would decide how much the insurer should pay the provider.

“We’re facing a classic scenario in which we need legislation, but the legislation proposed so far has gotten pushback from all sides,” Dr. Joynt Maddox said. “Physician and hospital lobbies don’t think the fixes give them adequate compensation, while insurance companies and patients may not think the proposals go far enough.”

With no national-level legislation, some states have adopted their own surprise billing laws with varying degrees of protections for consumers.

However, Dr. Joynt Maddox does not see state laws as a solution to surprise medical bills. “Surprise medical bills are a symptom of a completely broken health care market,” she said. “We can patch the system and limit the bleeding, but it’s not solving the problem of what got us here—that the market isn’t working to limit costs of care due to hospital and insurer consolidation and a lack of transparency. That said, I hope the patches we come up with can save patients from medical bills that threaten their financial security.”