If you still see this message after updating your profile, please email our support team
Helpdesk@McMahonmed.comwuqbrtcfyzedvvreuttwefuqdxrezrebft

Coming to the hospital on a Sunday morning after a busy Friday night call seems like a schedule that has been outlawed for the residents. The sun is shining, so we know the beachgoers will be out in droves, and someone will drive too fast or too drunk; the stabbings or shootings drop in suddenly, and more accidents keep rolling in after the bars close. These are the rhythms of a 24-hour day with great weather for a surgeon covering trauma call, and sometimes we pray for rain.

“Joy in Surgery” was the keynote speech at the Northeast Surgical Congress hosted by the New York Surgical Society that came at the end of a lovely May day in New York City, full of interesting talks. Carlos Pellegrini, the former chairman of surgery at the University of Washington in Seattle, gave a fantastic presentation, and I was surprised to learn about the Japanese concept of “ikigai,” which translates roughly as “value of life.”

As a Korean-American general surgeon listening to an Argentinian surgeon coach, I was intrigued by the global nature of the talk. Dr. Pellegrini described how examinations of the Japanese people from the island of Okinawa found the highest percentage of people living happy lives past the age of 100 years old. People who went to study these centenarian folk learned of the concept of ikigai (pronounced “icky guy”) whereby four traits can be applied to relationships, habits and work, as seen in this very cool depiction (Figure).

For beginners, ikigai consists of four conditions: First, you love what you do; second, you are good at it; third, the world needs what you do; and fourth, you can get paid to do it. If you meet all these conditions, then you have ikigai. Lightning struck me as I realized that for the past 14 years, despite my failures and truncated misadventures, more days than not I have been blessed with ikigai. To learn this concept just as I turned 50 years old means that maybe there is hope for the next 50 years. 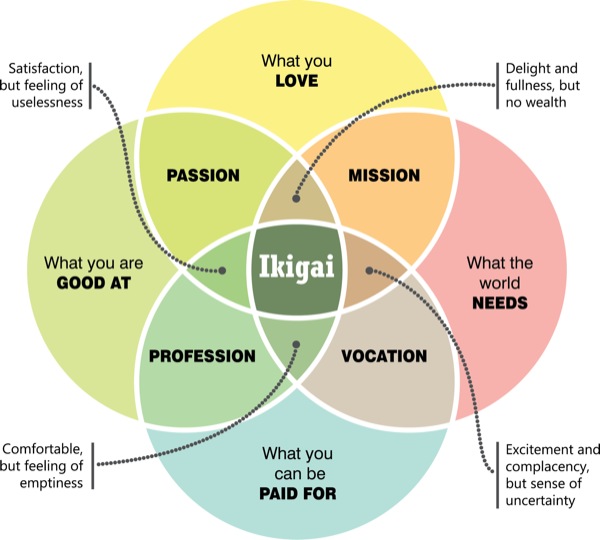 Figure. Visual depiction of the Japanese concept of ikigai, or “value of life.”

There are several interesting spaces in the diagram that I have floated into and out of over the years. I remember signing for our first mortgage on a house and taking on debt that created the opposite of wealth, but at work there was still “delight and fullness.” Being frugal and paying off the mortgage years later was cause for celebration, just in time to start paying for tuitions for the children; but fortunately, steady work as a hospital-employed attending surgeon brings a pretty comfortable lifestyle.

Usually I feel good at what I do, but an exciting surgical practice sometimes comes with missed diagnoses and horrible complications. Learning to say “thank you” and “I am sorry” helps to fight off feelings of complacency about not being the special billionaire who invented the last great surgical app. Seeing people in the workplace who recognize your work dispels any feelings of uselessness, and I am trying harder to stop and talk to people at work. Sitting down in the coffee shop with other workers creates moments that easily replace lunches in front of the computer screen.

Meetings with other surgeons can be an opportunity to recharge the batteries. Recently, I have met other young surgeons at various meetings, and I have been sharing this concept of ikigai. For some of these other surgeons, the idea has had the same effect—lightning in a bottle and a mind blown. If we can shut out the frustrations of inefficient scheduling that tax us greedily as we stay later and later to complete electronic health records after our shifts are over, we can boil down our activities to the essence of surgery—helping people with our hands and minds.

At the Surgical Infection Society meeting in San Diego, I met Dr. Rishi Rattan, a Trauma and Acute Care Surgeon from the University of Miami who spent some time with the Swedish army. Dr. Rattan taught me about the Swedish concept of “lagom” that translates roughly as “not too much, and not too little.” As per the Goldilocks story, the bed and the porridge of the baby bear were just right. In a large homogeneous country, it strikes me as interesting that the hard-working, fiercely independent Swedes would value everyone striving to be about the same culturally. This concept of lagom seems very anti-American in that manifest destiny, individualism, and “make a billion dollars by the age of 30” infuse the spirit of American exploits in all aspects of life. The efforts to stand out, shine, and be seen on Facebook, Twitter and Snapchat don’t seem to embrace the concept of lagom, but perhaps in a hospital or department of surgery, there is value in supporting the “good enough.”

These musings led me to the final approach-to-life concept that I have learned recently: another Scandinavian term, this one from Denmark, called “hygge” (pronounced “hue-guh”). In a land where the winters consist of bitter cold and darkness, the Danes have developed the idea of “coziness” wherein they huddle together, light incense candles, drink warm beverages, and share good company often by telling stories. Many of my former residents have come back to join a relatively stable department, and I have wondered why they choose to return. In a department that embraces young surgeons, openly discusses their surgical complications, and shepherds their early years after training where the learning curves are steepest, I think we can create an environment of hygge for surgeons.

A bitter coldness has been created in this big world of health care by the need for electronic documentation, billing and defensive medicine. But perhaps we can use these foreign, but not so strange, concepts of ikigai, lagom and hygge to create a protected place where ideas and failures can be shared that just makes us feel like we belong.

When I was a kid, my father, who is an orthopedic surgeon, would take me on rounds in his hospitals. I remember at that time there were great physician lounges where there was coffee and mailboxes, and physicians would sit and chat about their patients. Those physician lounges seem to have disappeared, and I suggested to our administrators that we build a new space for physicians. We call this space a Physician Wellness Center, and I hope the space can improve morale. 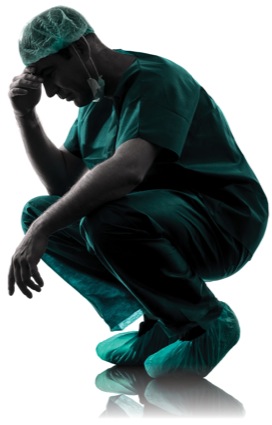 My father was born and lived in Japan before World War II. I was talking to him and he told me, for the first time, his story of a day when he was 6 years old when he remembers his father—my grandfather—saying the Americans were going to drop a big bomb on Japan and they had to leave their home. His father closed the restaurant, packed up the six kids (my dad was the youngest), and took a ship back to Korea. Soon after, the bombs fell on Hiroshima and Nagasaki that ended the war. My father grew up in Korea where he eventually went to medical school, served in the army, and was lucky and brave enough to immigrate to America in 1963, when the United States needed more doctors. He became an orthopedic trauma surgeon, and sometimes when I am up operating in the middle of the night, I think about my life as a reflection of his life.

Last year, I met a visiting orthopedic surgeon who had worked with my father in the past. I asked Dr. Burgess what my dad was like, and he said, “Oh, yes, Dr. Kim was always quiet and competent. Whenever the residents, the other attendings and I didn’t know exactly what to do on a tough case, we went to him sitting in the corner at the conferences, and he would always tell us the right answer.”

I imagine my dad went to all the teaching conferences and sat quietly and listened. It sounds like he practiced lagom, and maybe he knew about Ikigai, too, from his early years in Japan. There is something to be said about being known as quiet and competent. Happy 81st birthday, Dad!

Continuing antimicrobial regimens after surgery does not decrease surgical site infections but may increase acute kidney injuries and Clostridioides difficile infections, according to a new...

COVID-19 (Probably) Coming to a Community Near You

Coming to the hospital on a Sunday morning after a busy Friday night call seems like a schedule that has been outlawed for the residents....
Archives
December 2019
September 2019
June 2019
March 2019
MORE
Copyright © 2004-2020 McMahon Publishing unless otherwise noted. OR Management News News and https://www.ormanagement.net are part of McMahon Publishing. All rights reserved. Reproduction in whole or in part without permission is prohibited.