If you still see this message after updating your profile, please email our support team
Helpdesk@McMahonmed.comdwrdycctueefdczq

How to Bridge the Digital Divide—In Your Office

Many patients don’t have a problem with their doctor using a computer during office visits, but some report being irritated by the way physicians use the technology at the point of care. 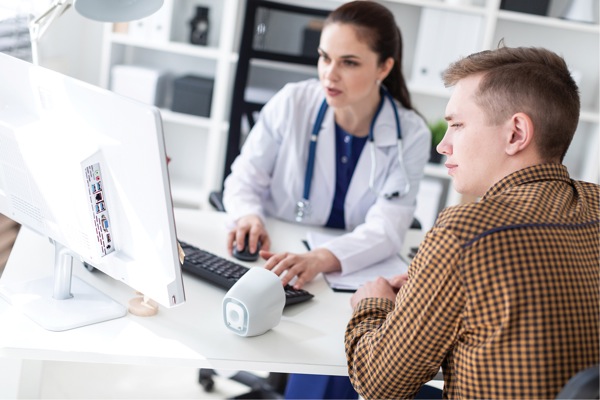 At the 2019 GI Roundtable, Seattle-based psychologist Daniel O’Connell, PhD, described how to establish the computer as a supportive tool instead of a barrier to care.

“When we surveyed patients, the ones who were impressed with the use of the computer said they thought it enhanced their care in the moment; the ones who were not impressed wished the doctor would stop typing so much and listen to them; some actually thought the doctor was internet shopping,” said Dr. O’Connell, who coaches physicians and others on the psychology of medicine and clinical interactions and also teaches a seminar titled “Connected: Communicating and Computing in the Exam Room.” “They don’t know how the computer adds value unless you can show them how it enhances their care.”

Many patients do not realize that physicians do a lot of work they don’t see—capturing their concerns, sending in prescriptions and making referrals. “So, do it during their visit time and show them the work you’re putting into their visit,” he said.

Dr. O’Connell advises practices to give some thought to the placement of the computer in the exam room. Ideally, there should be a 45-degree angle between the doctor and patient when the physician is looking at the computer screen. This set-up allows for easy eye contact with the patient and gives the patient visual access to the screen as Dr. O’Connell demonstrated using his laptop as a prop with Thomas Deas, MD, an associate professor and physician development coach at Texas Christian University and University of North Texas Health Science Center, in Fort Worth, playing the role of a patient.

“The room setup really makes a difference for the patient’s acceptance of the computer,” Dr. O’Connell said. “If they can’t see the screen, it seems like you’re keeping a secret from them.” 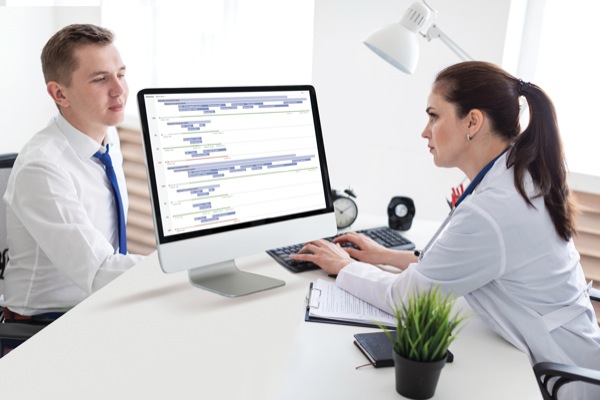 Perhaps the worst setup requires clinicians to turn their back on the patient while typing notes, and another in which the physician and patient face each other but with the computer between them isn’t much better.

“When I was sitting across from Dr. O’Connell and all I could see was the back of the screen, it was like there was a wall between us,” Dr. Deas said. “Changing that angle, which seemed like a really minor shift, just opened up the whole conversation.”

If your computer is immovable—bolted to the wall, for example—then seat the patient beside you, Dr. O’Connell suggested. “You need to create this golden triangle between you, the computer and the patient as well as you can.”

Relate to the Patient, Not the Machine

Verbalize what you’re doing with the computer throughout the visit so patients can understand how it enhances their care.

“We can show the patient right from the beginning the advantages the computer gives us. For example, unlike us, it has a perfect memory,” Dr. O’Connell said. “I can open the patient’s electronic health record to see what information we have already: ‘Here we have your referring physician’s last note and a list of medications you’ve taken recently.’ I want the patient to be glad I have this computer.”

Take notes in a way that encourages connection rather than seeming disruptive. “If I type while the patient talks, I’m not relating to the patient, I’m relating to the computer,” Dr. O’Connell said. “Make eye contact as you ask questions; this allows you to register signs of the patient’s concerns or distress and demonstrate empathy for that patient. Wait until the patient has finished a phrase before you start typing. You can ask if it’s OK for you to take notes while the information is still fresh in your mind; almost no one objects to that.”

When making notes is extensive, requiring more than five seconds or so, Dr. O’Connell advises physicians to say aloud the information they’re typing. Doing so serves three purposes: It allows the doctor to capture history immediately rather than building up work that will have to be done later; it keeps the patient from talking over the doctor to fill an uncomfortable silence; and it gives the patient a way to be involved in creating an accurate history and to corroborate the discussion.

“We’re on OpenNotes, and 72% of our patients do read their progress note,” Dr. O’Connell said. “I don’t want Tom to read anything tonight that he disagrees with, because this means I’ll have to amend my notes, and he might lose confidence in my accuracy.”

At the end of the visit, use the computer to print a summary detailing the treatment plan so patients have something to refer to. “People will forget 50% of what you tell them by the time they get to their parked car. An after-visit summary is enduring material that they can read, re-read, and share with family who will ask about their visit,” Dr. O’Connell said.

“The computer is a powerful tool, particularly if you know shortcuts such as building visit templates so less free typing is needed,” he said. “If you don’t know how to do such things, ask a colleague to show you, or better yet to let you shadow for a few visits to see exactly how they use the computer in the exam; it can help make your patients’ lives easier.”