If you still see this message after updating your profile, please email our support team
Helpdesk@McMahonmed.com
avceeaecrz

Managing Operations in the Wake of Disaster

How One Hospital Coped With a Hurricane

“Hurricane Harvey came earlier than expected,” said Abigail Caudle, MD, a breast cancer surgeon and the executive medical director of perioperative services at the University of Texas MD Anderson Cancer Center, in Houston. “We were expecting landfall on Sunday night into Monday morning, so we had held back our ride out teams because we didn’t want them to get fatigued. Unfortunately, the storm came Saturday night. By the time we realized it was upon us, it was too late to get anyone into the hospital.”

Harvey is considered one of the deadliest hurricanes to hit the United States, according to a 2018 report from the National Hurricane Center. The storm lasted several days—significantly longer than most—and flooding continued about a week afterward. At least 68 people died from the direct effects of the storm, and estimates of the financial fallout came to $125 billion.

But Harvey is hardly the only disaster to befall the United States in recent years. According to data from the National Oceanic and Atmospheric Administration, the United States experienced a historic number of weather and climate disasters in 2017, which claimed more than 350 lives and led to damages of more than $300 billion. Last year, the United States didn’t fare much better with 14 such events, each costing more than $1 billion in losses. 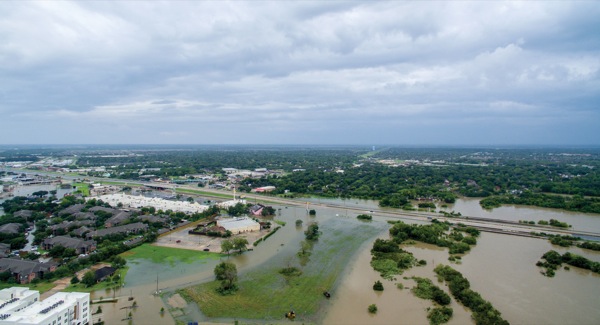 The aftermath of Hurricane Harvey in League City, Texas, within the Greater Houston metropolitan area.

Experts forecast that the effect of climate change will only increase the frequency of extreme weather events, which is why it’s especially critical for health care institutions to know how to prepare for, cope during, and recover after a disaster (Int J Environ Res Public Health 2019;16[3]:299).

At the 2019 OR Business Management Conference, Dr. Caudle shared her institution’s experience during Harvey and provided strategies for handling challenges that arise.

“There are preparations everyone should have in their back pocket.” But more importantly, Dr. Caudle said, institutions need to know what to do about recovery.

When the hurricane hit, the bottom floors of the hospital flooded. About 1,000 employees and 500 patients were already inside, but no one else could gain access on Sunday. The hospital received almost 8,500 calls from patients asking what to do. Many patients had flown in a week before their surgery for preoperative appointments and were staying in hotels nearby, unable to get to the hospital through the storm.

“We needed to figure out how we could get things back up and running in a timely fashion,” Dr. Caudle said.

Harvey was not MD Anderson’s first rodeo with a devastating hurricane. “We handle hurricanes every few years, and flooding on a fairly regular basis, so we had some infrastructure in place to help us,” Dr. Caudle said. 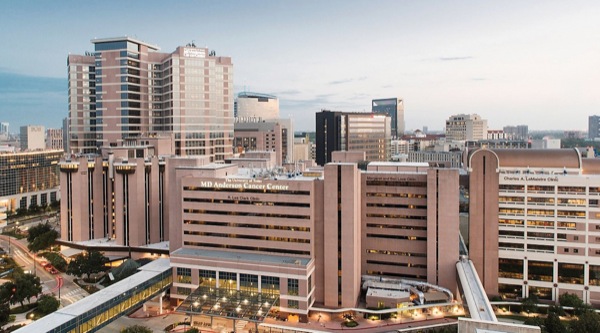 On Sunday at 6 a.m., the conference calls began. Throughout the day, directors, OR leadership, nurse managers and the surgery department continued to assess the damage and how to proceed. More than 350 cases were scheduled for the week, but most supplies in sterile processing had been contaminated from the flooding. With limited resources, only about 10% or fewer cases could be performed that week. “We asked surgeons to prioritize their cases, and everyone pitched in,” Dr. Caudle said.

Case priority level was graded by critical (life and death), urgent (out-of-town patients or with a narrow therapeutic window), and elective (cases that could happen later).

Ultimately, surgeons performed 34 cases that week: two on Wednesday, 12 on Thursday and 20 on Friday. “All 11 cases deemed critical were done,” Dr. Caudle said.

As the storm abated that first week, more than 2,000 employees came on-site to help with recovery efforts. “The only way we could get people in was by boat,” Dr. Caudle said.

After the first week, Dr. Caudle began working with information technology to facilitate a process to reschedule patients, and encouraged surgeons to swap out elective cases for urgent ones. “In week 3, we had completed 75% of canceled cases,” she said.

Although an emergency like Harvey brings chaos, Dr. Caudle stressed the importance of remaining calm, staying in constant communication about progress, and prioritizing patients. For instance, the team at MD Anderson keeps an emergency planning manual available on email, shared computer drives and paper with instructions on where to find key supplies—food, water, cots—and a list of essential phone numbers to reach patients, surgeons, IT support, blood banks and other personnel who can help.

“It’s an all-hands-on-deck moment,” Dr. Caudle said. “Your institution’s legacy is defined by your recovery. Handling emergencies well can make you stronger as a team.”

A Network of Resources

But MD Anderson was not the only medical center in Texas affected by the storm. Houston has 17 hospitals in close proximity, which all experienced their own challenges. “Luckily, there’s a robust relationship among these hospitals,” said Dr. Caudle, who noted that they communicated about borrowing resources or moving certain patients to a different facility.

In the event of a disaster, additional resources and recovery support may be available. In Texas, the SouthEast Texas Regional Advisory Council, or SETRAC, has developed a coalition of providers, responders and other health care professionals dedicated to protecting the medical infrastructure, coordinating a response, and allocating resources during emergencies.

“Health care coalitions can support health care system preparedness by connecting health care organizations with one another and with officials and organizations responsible for community-level public health emergency preparedness and response,” said Nicole A. Errett, PhD, MSPH, a lecturer in the Department of Environmental and Occupational Health Sciences at the University of Washington, in Seattle. Dr. Errett added that these coalitions can connect organizations that may not have significant in-house emergency management capacity to relevant expertise, tools and resources.

“Hospitals rely on a lot of community resources for their daily operations, including water, electricity and even clean linens,” Dr. Errett said. “They need a backup plan if and when normal supply chains or infrastructure fails during an emergency.”

On a broader level, the Federal Emergency Management Agency developed a National Disaster Recovery Framework in 2011 (updated in 2016) that focuses on rebuilding the community as a whole. In 2015, the National Academy of Medicine published post–disaster recovery strategies to guide communities in their efforts to rebuild health care institutions as well as roads, homes, parks and transportation. In 2016, the Department of Health and Human Services released the 2017-2022 Health Care Preparedness and Response Capabilities manual to delineate how health care systems, in particular, can prepare for and respond to emergencies affecting public health. That year, the Centers for Medicare & Medicaid Services established an emergency preparedness rule with national requirements to help health care providers plan for and continue to provide critical services in the event of a disaster.

“Providing continuity of care to patients is a huge part of a hospital’s role in a disaster,” Dr. Errett said.

Still, significant gaps in our understanding of these disasters and strategies to mitigate their impact on communities remain, according to James M. Shultz, PhD, and Sandro Galea, MD, PhD, in a recent perspective comparing the effects of Hurricanes Harvey, Irma and Maria (N Engl J Med 2017;377[19]:1804-1806). “The science of connecting survivors to appropriate postdisaster services remains in its infancy,” the authors wrote. Hurricane Maria, for example, wiped out local emergency response capacity in Puerto Rico, isolating survivors and creating long waits for help to arrive.

“There’s definitely onus on institutions to prepare for emergencies, but they also need community resources and support to succeed,” Dr. Errett said. “It takes a village to keep a health care system operational during a disaster.”