If you still see this message after updating your profile, please email our support team
Helpdesk@McMahonmed.comddxuvwfuxbasrrwwzducrxxscvcvavrxebbd

Awareness Key to Preventing OR Fires, Other Mishaps

The combination of oxygen, heat sources and alcohol-based skin preparations has the potential to cause fires that could harm patients and OR staff, a speaker said during the annual meeting of the Society of American Gastrointestinal and Endoscopic Surgeons, held virtually this year.

Many people think of fires as a campfire with yellow flames reaching toward the sky, Edward Jones, MD, said in a session on serious mishaps in the OR. By contrast, most OR fires are fueled by an alcohol-based skin prep and appear as a blue flame, said Dr. Jones, an associate professor of surgery at the University of Colorado School of Medicine and the director of surgical endoscopy at Rocky Mountain Regional VA Medical Center, in Aurora.

Because these fires are often surrounded by blue surgical towels, they can be hard to detect and rapidly get out of control. Smoldering conditions without flames in the OR also are considered fires and can be reported per Joint Commission requirements.

“This comes into play with laparoscopy, when the fiber-optic light cord, when left in place for a short period of time, can result in burns through surgical drapes or towels,” Dr. Jones said. “This can be classified as a fire even if it doesn’t extend beyond this or cause harm to the patient.” 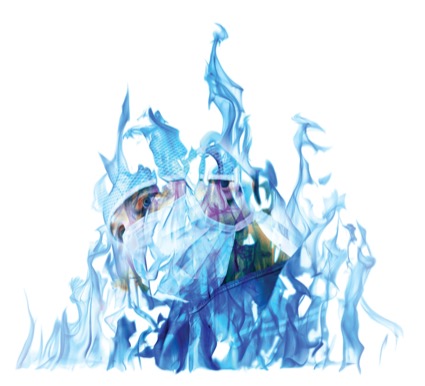 There are an estimated 200 to 300 reported OR fire incidents, resulting in two to three deaths, annually, according to the nonprofit ECRI Institute in Plymouth Meeting, Pa. This may sound small, but there has been an increasing number of voluntarily reported surgical device-related fires in the FDA’s Manufacturer and User Device Experience database, Dr. Jones said (J Am Coll Surg 2015;221[1]:197-205.e1). “It only takes one bad case to not only result in patient harm but also in likely harm to the hospital and health system,” he noted.

To prevent fires, Dr. Jones said, focus on three things: fuel, heat and an oxidizer. The most common oxidizers are oxygen or nitrous oxide, while heat sources include electrosurgical units, lasers or fiber-optic lights. Fuel sources can include alcohol preps as well as drapes, gowns, gauze, and even patient hair or tissue. He offered the following tips.

Be careful with supplemental oxygen. Turning up the flow on “open” oxygen systems like masks can increase the oxygen up to 50% more; draping the patient also can increase the oxygen content. Once the oxygen content increases to higher than 30%, things that are not usually flammable suddenly become so, Dr. Jones said. Use a closed oxygen system in high-risk situations. When operating on the face, near the mouth or nose, consider using an endotracheal tube.

“This isn’t 100% protective, but it’s a lot more protective than having a mask with additional oxygen right next to where you’re working,” Dr. Jones said.

Select the appropriate risk device for the procedure. When creating a tracheostomy in the airway, Dr. Jones said, don’t cut into the trachea with an energy device while the oxygen is elevated. If there is significant bleeding, skip the energy device and instead use a good surgical technique to suture leaky blood vessels.

Use caution with alcohol-based preps. Non–alcohol-based preps such as chlorhexidine or iodine are not flammable, Dr. Jones said. However, one in five cases using alcohol can be flammable (J Am Coll Surg 2017;225[1]:160-165). Even after waiting the recommended three minutes of drying time, the area is still potentially flammable, especially if the alcohol has pooled, he said. Fires can also start from alcohol that has seeped into the drapes or towels near the patient. Do not drape the patient until the prep is dry and there are no pools present.

If a fire does start, it needs to be identified immediately, Dr. Jones said. Stop the flow of airway gases if the patient is intubated and remove the endotracheal tube, especially if extra oxygen is flowing in. If there is an airway fire, pour saline in the airway and disconnect the breathing circuit. Extinguish fire on any burning material and on the patient if present, and restore breathing and care for the patient.

In addition, electrosurgical devices need to be used with caution to prevent serious OR mishaps, said Paschal Fuchshuber, MD, PhD, a clinical associate professor of surgery with UCSF East Bay, in San Francisco, and a surgeon with the Sutter East Bay group practice.

“We still call it electrocautery,” Dr. Fuchshuber said. “That’s old-fashioned and implies it’s a nonthreatening device. We’re all comfortable with it, but very few surgeons can explain the function of these devices and fewer the potential threat they represent for surgeons and patients.”

Electrosurgery still causes sparks, he said, and the electric current produces an electromagnetic field that can transfer energy from one instrument to another without the surgeon being aware.

Furthermore, if an electrical cord is wrapped around an instrument, the instrument can become electrically charged and cause burns to both the surgeon and patient. Breaks in insulation occur on 13% to 39% of laparoscopic instruments even out of the wrapper (e.g., Surg Endosc 2016;30[11]:4995-5001), Dr. Fuchshuber noted, and gloves are not perfect insulators to protect the hands.