Surgeons at Berkshire Medical Center developed a novel barrier to potentially decrease the risk for COVID-19 transmission during tracheostomy. Details were published in a recent issue of the Journal of American College of Surgeons (2020; 230[6]:1102-1104).

“In addition to all the PPE gear, we wanted to create a means to contain COVID-19 as much as possible to minimize exposure,” said Michael DiSiena, DO, the lead author and a surgeon at Berkshire Medical Center, in Pittsfield, Mass.

Dr. DiSiena said the technique is functional and easy to assemble, and it could be useful for other operations that entail aerosolization risk or droplet exposure to OR personnel.

“We used a table retractor, a device called the Omni-Tract [Integra Lifesciences],” he said. “It allowed us to create a frame, … a plastic barrier similar to a tent, that allowed us to minimize respiratory secretions from being expelled from the trachea when you perform the tracheostomy. 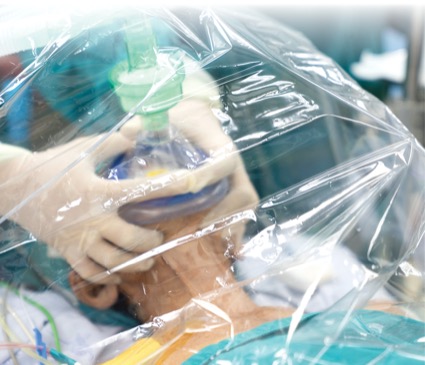 “If the patient has COVID-19 and you perform a tracheostomy, a gush of air is released, and that air can obviously contain respiratory droplets and viruses,” Dr. DiSiena said. “So, we developed almost a sterile tent that allowed us to see through the clear plastic drape, which is sterile. We could put our hands underneath this tent and work in an operative field.”

To further minimize the risk for contamination due to aerosolization, the team used a novel filtration system. “We then used a suction apparatus that allowed us to evacuate the air so it would be filtered almost like an N95 mask filter system,” Dr. DiSiena added.

The team also used a simple, yet novel method for testing this filtration system. While testing the air to detect respiratory droplets was outside the capabilities of their institution, the team lit a cigarette and had a smoker on staff take a puff in the field to test whether the smoke cleared. “We could not detect the cigarette smoke,” Dr. DiSiena said.

Nevertheless, Dr. DiSiena readily acknowledges that the technique lacks experimental validation. “We do not have any experimental data to prove the efficacy of it, but intuitively it seems to work out well,” he said. “Whether it ultimately translates into decreased exposure, I am unsure.”

To date, the staff at Berkshire Medical Center has employed the novel tracheostomy technique on two COVID-19 patients with positive outcomes. Dr. DiSiena also explained that the intervention requires approximately five to eight minutes of setup, and it did not render surgery unsafe in any way.

Looking forward, Dr. DiSiena anticipates that other surgeons and anesthesiologists could adopt the technique for improved safety. “We felt we came up with a great idea. We wanted to promote this technique as soon as possible given the crisis, and allow others to adapt to the technique, modify or improve upon it.” He also hopes that industry could use the idea to develop a commercial product with greater applicability.

In a separate interview, Jingping Wang, MD, PhD, an associate professor in the Department of Anesthesia, Critical Care and Pain Medicine at Massachusetts General Hospital, in Boston, provided his perspective.

“This instrument can be used as a physical shield, like wearing a mask. But we don’t know whether it functions like a surgical mask or N95 mask,” he said.

“It may or may not be a source of control for aerosols, unless supported by a validation test. Ideally, a device should be developed to function as not only a physical barrier but also a source of control for aerosol transmission, without interrupting surgery,” Dr. Wang said. We need better-designed devices to meet our clinical demands, not only in the OR but also in the ICU, ED, on the floor and during patient transportation.”