One of every five patients who underwent an incisional hernia repair in the United States was readmitted to the hospital within a year, with most readmissions occurring after the 30-day benchmark commonly used to track health care utilization, according to a new study of hospital admissions between 2010 and 2014.

Additionally, one-fourth of readmitted patients did not return to the same hospital where they were operated on, making their complications and readmissions even harder to track in most databases.

The analysis, published in the Journal of Surgical Research (2020;255:267-276), indicates many patients who are readmitted with complications following incisional hernia repair are overlooked, leading to consistent underreporting of complications.

“Patients, and some clinicians, may not be aware of how prevalent readmissions are after incisional hernia repair and that most readmissions are related to postoperative complications,” said study author Arturo J. Rios-Diaz, a fourth-year general surgery resident at Thomas Jefferson University, in Philadelphia. 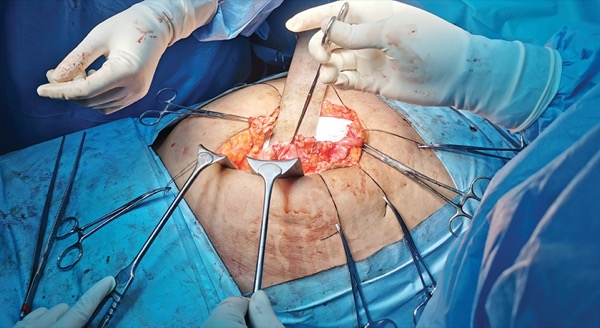 Many of the readmitted patients required substantial treatment. One-third of them underwent a subsequent major procedure during their return stay and 4.1% experienced a recurrence requiring an inpatient revision of their repair.

The study confirmed what some surgeons and patients have long suspected: Many complications and events related to quality of care in hernia, especially ventral hernia, occur well beyond the 30-day postoperative time point, said Benjamin Poulose, MD, a professor of surgery at The Ohio State University, in Columbus. This is especially important given that surgeons implant meshes in patients, expecting them to stay in place for years.

“This should be another wake-up call—not only to hernia surgeons, but also to hospitals, payors and those funding quality improvement and research efforts,” Dr. Poulose said.

With more than 350,000 incisional hernia repairs performed in the United States annually, the scale of overlooked complications is potentially enormous, with tens of thousands of patients requiring readmission for infections more than 30 days after surgery.

There is too little understanding in the field about why, how and in whom complications are occurring long term, and these uncertainties are driving massive legal actions in hernia repair, Dr. Poulose said. “We, as surgeons, can no longer just accept the status quo.”

Surgeons should follow their patients long term and develop targeted strategies to reduce complications, including appropriate patient selection, prehabilitation when needed, and good surgical judgment during the performance of the procedure, he said.

Complications were the leading cause of readmission, accounting for 50%, with half of them due to infectious complications. Of all patients readmitted for infection, 91.8% were initially discharged within a record to indicate infection. Readmission for bowel obstruction was found in 5% of patients, which is higher than previously reported rates and may be explained by the broad definition used by investigators. Reoperations were performed in 35% of readmitted patients and 5% had revisions to their repair.

The results highlight the need for national policies that require physicians to follow patients and collect data beyond 30 days, the investigators said. Most data on health care utilization after incisional hernia repair are only carried out to 30 days after surgery and are not nationally representative.

Dr. Rios-Diaz and his colleagues believe the readmission benchmark for incisional hernia repair should be extended to at least 60 days in the Centers for Medicare & Medicaid Services’ Hospital Readmissions Reductions Program, which reduces reimbursement by up to 3% to hospitals with excessive readmissions within 30 days of discharge.

The investigators estimate that the annual cost of unplanned readmissions totaled more than $90 million per year. After controlling for confounders, the predicted mean difference in cumulative costs and length of stay (index admission plus readmissions) were $12,189.70 higher and 6.1 days longer for patients readmitted within one year.

Generally, patients were between the ages of 45 and 65 years (49.1%) and most were female (58.8%), nondiabetic (80.81%) and not obese (77.54%). One-fourth of the initial hernia repairs were done laparoscopically and mesh was used in 88% of cases. Readmitted patients did not differ in age, sex, income quarter, obesity and hospital characteristics.