If you still see this message after updating your profile, please email our support team
Helpdesk@McMahonmed.com
sqrdxxfraycdczvawxe

Waiting More Than 72 Hours Increased Complications; Reasons for Delays Not Known, and Are Sometimes Unavoidable

Nearly three-fourths of patients admitted for acute cholecystitis at hospitals in the United States wait more than 24 hours for a cholecystectomy, with one in five waiting more than 72 hours for surgery, a new study shows.

These delays have consequences for patients. When surgery is postponed more than 72 hours, patients have higher rates of complications, 30-day readmissions and longer hospital stays, the analysis revealed. Patients experiencing a delay are more likely to require an open operation, and develop postoperative sepsis or a venous thromboembolism (VTE) event.

“This suggests that early cholecystectomy after admission seems warranted, and patients admitted on a Friday should not wait until Monday to undergo an operation,” said lead author Michael T. Scott, MD, a surgical resident at Robert Wood Johnson University Hospital, in New Brunswick, N.J.

Dr. Scott presented the study at the 2019 Clinical Congress of the American College of Surgeons.

He and his colleagues studied data collected by the ACS National Surgical Quality Improvement Program (NSQIP) between 2012 and 2016. During this period, 49,320 patients underwent nonelective laparoscopic or open surgery for acute cholecystitis.

Researchers adjusted for confounding factors such as age, body mass index and diabetes, and then evaluated the odds of complications and 30-day readmissions. They also looked at hospital length of stay.

The study found that most patients who underwent surgery within 24 hours of admission went home the same day or the next day, with an average total length of stay of less than 24 hours. When the procedure was delayed 72 hours or more, the total hospital stay averaged 4.9 days. Patients who waited 72 hours or more for surgery remained in the hospital longer postoperatively than those who underwent surgery immediately, at 1.17 days compared with 0.95 days. Compared with patients operated on within 24 hours, those with delayed procedures had an increased risk for open cholecystectomy (odds ratio [OR], 1.29), VTE (OR, 1.83), postoperative sepsis (OR, 1.53), and readmission within 30 days (OR, 1.25).

Most of the research conducted so far has focused on whether cholecystectomy should be done within seven days of diagnosis or delayed four to six weeks while inflammation resolves. Overall, the evidence favors cholecystectomy within the first week of admission. 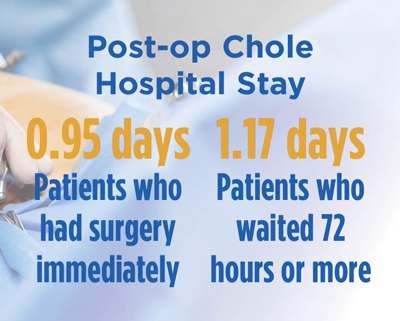 Few studies have looked at the results of operating earlier within the first week. A German randomized, multicenter trial compared outcomes between patients who underwent surgery within 24 hours of admission and those who received initial antibiotic treatment followed by a delayed laparoscopic cholecystectomy seven to 45 days after admission. The authors concluded that immediate laparoscopic cholecystectomy was superior to the conservative approach (Ann Surg 2013;258[3]:385-393). However, this study had a small group of patients who may differ from American patients.

Arghavan Salles, MD, a scholar-in-residence at Stanford University, in California, who moderated the ACS panel where the study was presented, said the new U.S. study is based on a large data set and adds support for the practice of early cholecystectomy. But the study doesn’t look at why patients experienced delays in surgery, and some of these delays may be unavoidable, she said.

For instance, some surgeons prefer to observe patients with elevated liver enzymes and perhaps have them undergo endoscopic retrograde cholangiopancreatography prior to surgery if indicated. At many institutions, surgeons do not always have immediate OR access for urgent cases of cholecystitis, which fall behind conditions like trauma, appendicitis or perforated viscus in priority. “That may make it difficult to make major changes in the management of acute cholecystitis,” Dr. Salles said.

The study was not a nationally representative sample, Dr. Scott cautioned.

He advised surgeons at NSQIP hospitals to look at their experience with cholecystectomy and investigate whether their current practices involve delays to the OR. This could be “an opportunity to enhance the value of care provided to their patients,” Dr. Scott said.

There could be a cost savings for the health system if surgeons operated on patients earlier, said co-author Stanley Z. Trooskin, MD, the chief of surgical services at Robert Wood Johnson University Hospital. The costs from patients’ index hospital admission would drop with a shorter stay, and patients operated on earlier had a lower chance of readmission. Patients who waited 72 hours or longer for their operation had a 25% higher rate of readmission within 30 days, he noted.

Nearly three-fourths of patients admitted for acute cholecystitis at hospitals in the United States wait more than 24 hours for a cholecystectomy, with one in...