If you still see this message after updating your profile, please email our support team
Helpdesk@McMahonmed.comsqrdxxfraycdczvawxe

New York—Incisional hernias continue to occur at a rate worldwide that many would consider unacceptable. Even though some risk factors for hernia are unavoidable, there are techniques and materials that surgeons can employ to mitigate risk—if they would only use them.

“We have roughly the same proportion of incisional hernias now as 50 years ago. It’s intriguing that we haven’t made progress in avoiding this pathology,” said Flavio Malcher, MD, speaking on the topic at the 2019 Problems, Techniques and Controversies in Surgery meeting. His presentation was part of the Americas Hernia Society’s “Stop the Bulge” campaign.

Surgeons in the United States perform nearly 2 million laparotomies per year. Incisional hernias are estimated to occur in more than 25% of these patients, an incidence exceeding 500,000 ventral hernias annually.

“Most of us don’t think a quarter of our patients develop incisional hernias. But if you follow them long enough, you may see far more hernias than you imagine,” said Dr. Malcher, an assistant professor of surgery at Albert Einstein College of Medicine and the director of the abdominal wall program at Montefiore Medical Center, both in New York City. “Even if you diagnose and treat those hernias, they still recur in up to 20%. This is a vicious cycle.”

There are risk factors beyond the surgeon’s control, such as patient age, wound contamination or urgency of the surgery. In addition, surgeons have limited influence on patient-modifiable conditions. “But there are some risk factors we can change,” Dr. Malcher said. 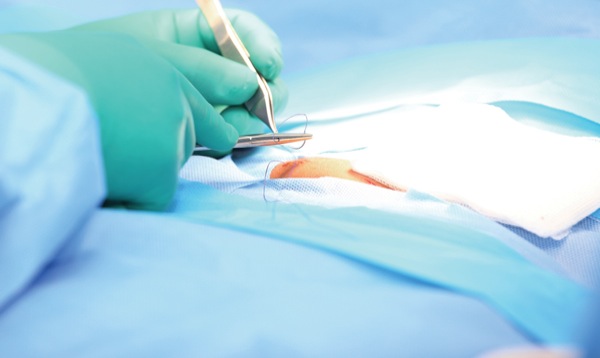 Closure of the fascia is another area where a surgeon’s actions may have a profound effect on hernia risk. “Most surgeons, including me, close our fascia based on personal preference, training or habits rather than clinical evidence. Everyone asks for the data, but when you show it to them, few make that change in their practice,” Dr. Malcher said.

Abdominal wall closure has been a focus of studies for decades. A summary of Leif A. Israelsson’s work shows markedly lower wound infection and hernia development rates when the fascia is closed with small stitches instead of large ones (Arch Surg 2009;144[11]:1056-1059).

The more recent STITCH trial also found far fewer hernias in patients whose fascia was closed with small bites rather than large ones, at 13% versus 23% (Lancet 2015;386[10000]:1254-1260). It takes about 40% longer time to close this way, but it still may be cost-effective considering the expense in repairing hernias and hernia recurrences.

Dr. Malcher advocates for small bites (a 4:1 suture-to-wound length ratio), small needles, and 2-0 slowly absorbable or nonabsorbable polypropylene sutures, and has a preference for self-locking knots, all of which roughly follows the technique supported by the European Hernia Society.

“But why don’t we use this in the United States? I really can’t tell,” Dr. Malcher said.

One possible explanation is that the findings of European trials may not be extrapolated to U.S. patient populations.

“There is really great, level I evidence supporting the theory that how you close the fascia has an impact on the risk of hernia occurrence. But this hasn’t been shown in the United States., where our patients tend to have a higher body mass index than the patients involved in those trials,” John Fischer, MD, MPH, an associate professor of surgery at the University of Pennsylvania Health System, in Philadelphia, said.

“Also, one of the clear downsides of that approach is the risk of burst abdomen, or evisceration, where the sutures all fail and the wound opens—a terrible outcome and an acute surgical problem. We rarely see that in the [United States], but there might be a greater risk of it happening in obese patients when using the short-stitch closure,” he said.

Both Drs. Fischer and Malcher believe it is important to consider the use of prophylactic mesh in patients at high risk for developing a hernia. A randomized controlled trial of patients undergoing open aortic surgery for abdominal aortic aneurysm found that hernia occurred in 28% of controls and none of the patients who received prophylactic mesh (Ann Surg 2016;263[4]:638-645).

“That’s pretty good in that patient population,” Dr. Malcher said, noting that historically the hernia rate for these patients is around 50%.

The PRIMA study also showed that the use of mesh to support the closure reduced the occurrence of hernia in aortic aneurysm patients. “From 30% at two years to about 13% with a simple onlay of polypropylene mesh: That’s a tremendous difference both clinically and statistically,” Dr. Fischer said.

Questions remain about which approach and which mesh would have the best results.

Dr. Fischer predicted that the incidence of incisional hernia could fall with, in addition to refined closure techniques and use of prophylactic mesh, increasing performance of minimally invasive surgeries and better prevention of surgical site infections. “We know ssIs compromise the healing of the fascia, which in turn predisposes patients to hernias.”

Dr. Malcher reported he is a consultant to BD International and Medtronic. Dr. Fischer reported payment as an educational consultant from Allergan, BD, Gore and Integra; he serves on an advisory board for Mesh Suture; and he is the founder of Paradigm Surgical, LLC, and has intellectual property around hernia risk prediction systems and mesh fixation devices.

Nearly three-fourths of patients admitted for acute cholecystitis at hospitals in the United States wait more than 24 hours for a cholecystectomy, with one in...