Web Only
MAY 12, 2020
COVID-19 Reduces Surgeons’ Business, But Relief Is Available
An Overview of Financial Aid for Surgeons

As a solo practitioner in rural El Centro, Calif., surgeon Seung Gwon, MD, FACS, usually has a booming business performing hernia, gallbladder, breast cancer, colon cancer, bowel and other operations. Then the COVID-19 pandemic hit, and her hospital’s capacity for elective operations was cut by almost 95%.

The financial impact on Dr. Gwon and other surgeons in private practice from COVID-19—and the resulting indefinite postponement of elective procedures—“has been devastating,” she said. “In a typical day, I would see anywhere from 20 to 30 patients. Right now, I’m seeing two. In a typical week, I would do probably at least 10 surgeries and 10 additional procedures. In the last two weeks, I did zero surgeries, and next week I’ll be doing two.”

Dr. Gwon, like others, has moved largely to telehealth appointments. She furloughed half her staff and moved the rest to half-time work. The few patients still coming to the office for postoperative care are seen one at a time, while she and her staff wear masks and sanitize the room and waiting area as soon as they leave.

“I’m wondering how many of us are going to be able to survive this,” Dr. Gwon said. She and others working in rural communities at least get paid to take call, which is enough to keep her “limping along so that I don’t think I’ll have to close,” she said. 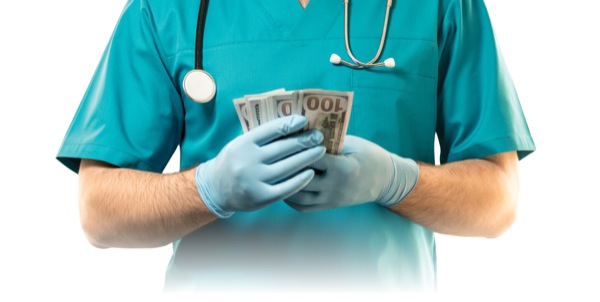 “For doctors who have purely elective practices, who don’t take call or have an alternate way to generate income, this is going to be a really tough time for them,” she said. “The longer this goes on, the worse it’s going to be for that specific category of physician.”

Dr. Gwon is not alone. Marina Kurian, MD, who has her own bariatric surgery practice in New York City, usually sees 60 to 80 patients a week. She last performed surgery in early March. Dr. Kurian has been able to maintain caring for patients postoperatively through phone or telehealth appointments, and participated in webinars, but hasn’t evaluated any new patients since the pandemic hit.

“It’s a problem because I need to keep the pipeline going,” she said. So far, Dr. Kurian hasn’t had to lay off staff, but she’s relying on her billing company to try to recoup any outstanding claims, and also trying to reduce costs.

“The biggest concern is how long is this going to last, how much will it affect us, and how much of a loan can you take out,” Dr. Kurian said. “At some point you’re borrowing money now, but you still have to pay it back. You want to be sure that the patient stream is there, which I think it will be, but this is really going to hurt us more than some of the employed people. This is not like we’re on hiatus for a couple of days; this is a disaster of epic proportions, not being able to operate.”

“I usually see 12 patients in a day,” he said, “and now it’s three, on the telephone. I do not get any income right now unless I do elective surgical cases, which are banned. Unfortunately, my professional liability insurance premium isn’t banned, my rent isn’t banned and my utilities aren’t banned.”

The curtailment of elective surgery “is causing a significant amount of distress and concern” for surgeons, said Patrick Bailey, MD, MLS, FACS, the medical director of advocacy for the American College of Surgeons (ACS).

Fortunately, there are funds available to help. The ACS has information on its website about financial resources to assist surgeons during the pandemic (www.facs.org/ covid-19). Dr. Bailey said these consist of four main areas:

It’s a tough time for a lot of businesses, Dr. Gwon said. She applied for the SBA loan the morning it became available, and was about the 300,000th person to do so. A colleague who applied the next day was No. 600,000. “I don’t think anyone realized how many people were going to be affected,” she said.

There are other avenues surgeons can pursue, too. Some states and cities have grants available to help boost small businesses, Drs. Gwon and Kurian said. In addition, check with your landlord or malpractice carrier to see if they will permit extra time to make payments. If you are leasing equipment, ask if the manufacturer will allow you to defer payments.

The ACS has formed a Practice Protection Committee that has additional resources on items to discuss with your tax advisor or how to bill for telehealth appointments, Dr. Bailey said.

“I’m amazed right now at how everybody is trying to be very accommodating,” he said. “I’m hearing reports of medical malpractice providers delaying when payments are due and landlords understanding about rents. … I encourage surgeons to have those conversations and hopefully, we will continue to hear of the same kind of willingness to be flexible.”