Antimicrobial resistance is part of natural selection and has existed for millennia. The development of antimicrobial agents over the past 80 years has only intensified the problem. Antibiotic resistance occurs in the community and the hospital setting. In the community, the clinician usually is faced with quinolone-resistant Escherichia coli urinary tract infections, methicillin-resistant Staphylococcus aureus (MRSA) skin infections, and macrolide-resistant group A streptococcal (GAS) infections. MRSA is also a problem in the hospital setting; resistance among E. coli, Klebsiella pneumoniae, Acinetobacter baumanni, and Pseudomonas aeruginosa are commonplace, particularly in the intensive care setting. 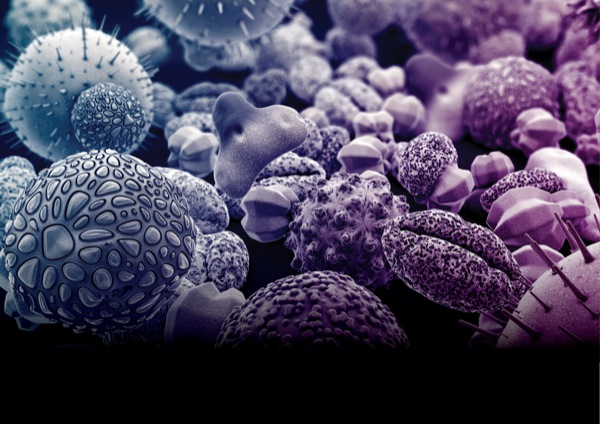 This article focuses on gram-negative bacterial infections commonly seen in the hospital setting and will discuss newer diagnostic technology that the clinician can use for both diagnosis and rapid determination of antibiotic resistance. Drug-resistant mycobacterial (tuberculosis), parasitic, viral, or fungal infections will not be discussed.

Treatment of patients in the acute setting, whether it be the emergency department, ICU, hospital ward, or clinic relies on clinical judgment to determine the most likely diagnosis and causative organisms. Clinicians have readily available technology to help support a clinical diagnosis. For example, the clinician who sees a patient presenting with fever, cough, and chills can order a chest radiograph to rapidly determine whether or not pneumonia is present. However, the clinical diagnosis of pneumonia is not the same as the microbiological diagnosis. Broad-spectrum antibiotics are frequently used even when clinicians follow accepted guidelines for empiric therapy. Rapid diagnostic tests (RDTs) can be helpful in these patients to streamline or de-escalate therapy. For example, urine antigen testing for Legionella pneumophila or Streptococcus pneumoniae are reasonably sensitive (approximately 70%) and highly specific. Unfortunately, these tests do not give any information regarding antibiotic susceptibility.

Blood cultures have variable sensitivity depending on the diagnosis. For example, blood cultures are positive in roughly 25% to 40% of patients with sepsis, whereas they are rarely positive in patients with cellulitis. Positive blood cultures should help tailor antimicrobial therapy even before susceptibility testing is available. For example, broad-spectrum antibiotics such as vancomycin and piperacillin-tazobactam (or cefepime) commonly are started empirically for a patient with sepsis. If blood cultures obtained prior to starting antibiotics grow a gram-negative rod, then vancomycin can usually be discontinued (unless there are extenuating circumstances).

In addition to providing early identification of common organisms, the technology can also give information regarding the presence or absence of common resistance genes. For example, specific genetic primers can determine the presence or absence of the mecA gene, which is the principal mechanism for resistance to methicillin and all other beta-lactam drugs (except ceftaroline). Blood cultures that grow gram-positive cocci would be probed with primers that detect the common gram-positive cocci (Table 1). Some technology can provide this information within 4 hours of the presence of growth in blood cultures and can provide the clinician with susceptibility information typically 48 hours earlier than with standard microbiology microwell broth dilution information. For blood cultures growing gram-negative rods, these cultures are probed with a different set of probes that are specific for the common gram-negative organisms (Table 2). 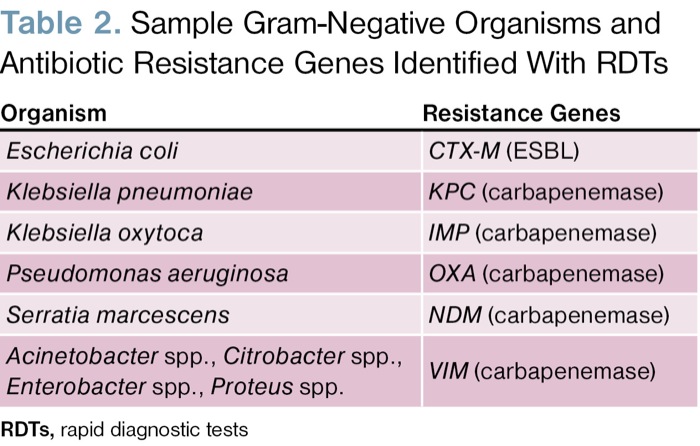 Resistance in gram-negative organisms is a more complicated process than with gram-positive bacteria. In general, resistance may be related to mutations that affect the entry of antibiotics into bacteria (ie, porins); altered binding to receptor molecules (eg, beta-lactamases); or increased activity of efflux pumps that remove the antibiotic from the bacteria. Much attention has been given to beta-lactamases, which are enzymes that hydrolyze the beta-lactam ring of penicillins, cephalosporins, and carbapenems, thereby rendering the drugs inactive.4

The clinically important beta-lactamases in gram-negative organisms include AmpC, extended-spectrum beta-lactamases (ESBL), and carbapenemases (Table 3). Enterobacter species, Serratia marcesens, and Citrobacter species commonly possess AmpC-type beta-lactamases. These organisms typically are resistant to first-, second-, and third-generation cephalosporins. The AmpC gene is chromosomal in Enterobacter, Serratia, and Citrobacter and is inducible by beta-lactams. The AmpC gene is either poorly expressed or not expressed in E. coli and Klebsiella species, respectively, but the gene can be acquired from a plasmid of another organism, thus giving it the same phenotype as Enterobacter. ESBL-producing bacteria can hydrolyze penicillins, cephalosporins, and monobactams. Fortunately, the carbapenems and cefepime are effective against AmpC-producing organisms, but de-repression of AmpC in combination with other resistance mechanisms (see below) can complicate the situation. ESBL-producing organisms often carry various genes on plasmids that make them resistant to other classes of antibiotics, such as aminoglycosides and fluoroquinolones. 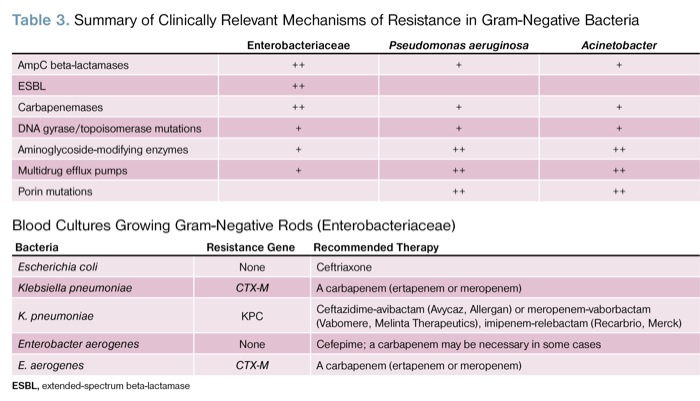 Carbapenemase-producing organisms are being recognized increasingly in Enterobacteriaceae, most commonly K. pneumoniae, and are designated CRE.5 The carbapenemases are a diverse group of beta-lactamases; the common types are designated serine carbapenemases (classes A, C, and D) and metallo-beta-lactamases (class B) because of the critical importance of zinc ion to beta-lactamase activity. The latter class includes the New Delhi metallo-beta-lactamase. Because carbapenemase genes are located on plasmids, there is the potential for rapid transfer of the genetic material to other organisms, including other species and P. aeruginosa. Also, co-transfer of other resistance genes from the same plasmid is common, making these organisms resistant to all beta-lactams, aminoglycosides, fluoroquinolones, and tetracyclines.

Efflux pumps are present in many bacteria and are responsible for removal of a variety of substances, including certain antimicrobial agents, from the cell. Upregulation of efflux pumps is a common mechanism of resistance of both P. aeruginosa and A. baumannii to carbapenems, particularly meropenem and doripenem, and to fluoroquinolones. Efflux pumps, although present, are not as common in Enterobacteriaceae. Other forms of resistance seen with P. aeruginosa and Acinetobacter include aminoglycoside-modifying enzymes, and AmpC and metallo-beta-lactamases.6

Porins are outer membrane protein channels that allow certain substances, including some antibiotics, to penetrate the bacterial cell membrane and wall. Downregulation of the outer membrane proteins results in resistance of the organism to the drug (eg, imipenem-resistant P. aeruginosa). It is common for phenotypic resistance to certain antibiotics to be due to a variety of mechanisms, including carbapenemase or derepressed AmpC activity, in the presence of reduced expression of porins and upregulation of efflux pumps.

The RDTs for gram-negative organisms are most helpful for the Enterobacteriaceae as resistance in this group of organisms typically is mediated via beta-lactamases3 (Table 3). These tests are less useful in the management of infections (with bacteremia) caused by A. baumannii and P. aeruginosa as resistance commonly is mediated by other mechanisms, including porin channels and efflux pumps. The RDTs available today do not detect the genes that are involved in these resistance processes.

The major mechanisms of resistance and frequent resistance patterns seen with the more common MDR gram-negative bacilli are shown in Table 4. Treatment of MDR organisms begins with broad-spectrum antibiotics for the suspected organism. Empiric antibiotic therapy should be based on institution-specific antibiograms. Once an organism is identified and susceptibilities are available, antibiotics should be streamlined. 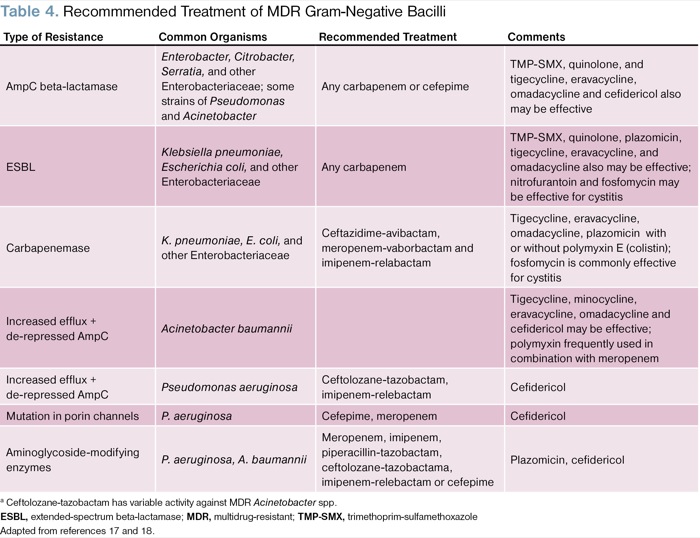 Treatment of patients with MDR infections depends on the particular type of organism and site of the infection. For example, in a patient with blood and urine cultures growing ESBL-producing E. coli, a carbapenem such as ertapenem or meropenem should be adequate. A patient with CRE K. pneumoniae in the blood will likely respond to treatment with ceftazidime-avibactam, imipenem-relebactam, or meropenem-vaborbactam. However, a patient with P. aeruginosa in the blood and tracheal aspirate will likely need empiric coverage with an antibiotic, such as piperacillin-tazobactam, cefepime, or meropenem. If the organism is found to be resistant to these agents, then a drug such as ceftolozane-tazobactam may be effective. This drug may be appropriate empiric therapy in an institution that has a high rate of carbapenem- and piperacillin-tazobactam–resistant P. aeruginosa. This drug is not a good substrate for efflux pumps, which account for much of the resistance associated with P. aeruginosa. Imipenem-relebactam is a reasonable alternative for many MDR P. aeruginosa, particularly if the predominant mechanism of resistance is due to efflux pumps and increased AmpC activity. Neither imipenem nor relebactam is a good substrate for efflux pumps, and relebactam has very good activity against AmpC.

Infections with A. baumannii tend to be resistant to multiple agents.9 The common mechanisms of resistance involve a combination of decreased porin channels, AmpC beta-lactamases, carbapenemases, and increased efflux pumps. Therefore, drugs such as meropenem, ceftazidime-avibactam, ceftolozane-tazobactam, imipenem-relebactam, and meropenem-vaborbactam frequently are ineffective. Treatment of these infections often requires a combination of polymyxin with one of the tetracyclines (minocycline, tigecycline, eravacycline [Xerava, Tetraphase], or omadacycline [Nuzyra, Paratek]). For isolates that are resistant to the tetracyclines, combination treatment with polymyxin B and meropenem frequently is used. The recently approved cefidericol (Fetroja, Shionogi), a sideraphore cephalosporin, has very good activity against MDR A. baumannii as well as multidrug-resistant P. aeruginosa.8 This drug is also stable against AmpC-, ESBL-, and carbapenemase-beta-lactamases.

Appropriate utilization of RDTs should help reduce the inappropriate use of broad-spectrum antimicrobial agents, leading to improvements in antimicrobial susceptibilities. Utilization of these tests helps in the management of patients with serious bacterial infections in which blood cultures are positive. Several new antibiotics have been recently approved, and more drugs should become available in the near future Older drugs, including nitrofurantoin and fosfomycin, are effective against many ESBL-producing and some CRE E. coli that cause lower urinary tract infections.

Dr. Cook reported that he has received grants and/or research support from Gilead Sciences, Leonard-Meron, and Seres.