If you still see this message after updating your profile, please email our support team
Helpdesk@McMahonmed.comwqxdwxbvcauuwdufwwvdcwzxbfvefewxyy

Medical History: How the World Responds to Pandemics

In Many Ways, Not Much Has Changed Over the Millennia

COVID-19 has thus far killed an estimated 375,000 people and infected another 6 million, both numbers gross underestimates expected still to increase. It has reshaped the way we live and die, altered international politics, and caused incalculable economic damage. Yet for all its cataclysmic effects, COVID-19 is but the most recent global pandemic. From Thucydides’s description of the Plague of Athens in roughly 430 B.C.E. to the coronavirus today, a series of infectious diseases have swept around the world, killing millions. Despite their biological differences and chronological separation, these events have elicited remarkably similar medical and social responses. Examining these parallels provides both clarity and perspective on the current pandemic.

The ‘Kübler-Ross’ Stages Of a Society’s Response to Pandemics

In 1969, Elisabeth Kübler-Ross published her now-famous model expositing different stages of grief and bereavement. Medical historians such as Charles Rosenberg and Steven Peitzman have elucidated a similar series of stages explaining how societies cope with pandemics such as COVID-19. Like the Kübler-Ross system, this model does not imply a strict progression, but it nonetheless provides a useful framework to help understand how society approaches and responds to a frightening, seemingly existential threat (Figure).

Figure. Stages of societal response to a pandemic.
ADVERTISEMENT

Throughout history, societies and individual citizens have been slow to accept the arrival of pandemics. Sometimes, this reluctance is strategic: The 1918 Spanish flu got its name because other countries with the disease refused to admit the problem in an effort to maintain military advantage. In other cases, economic reasons predominate, like the slow recognition of the 1897 yellow fever epidemic in New Orleans, in an effort to stave off quarantine and the commercial implications thereof. 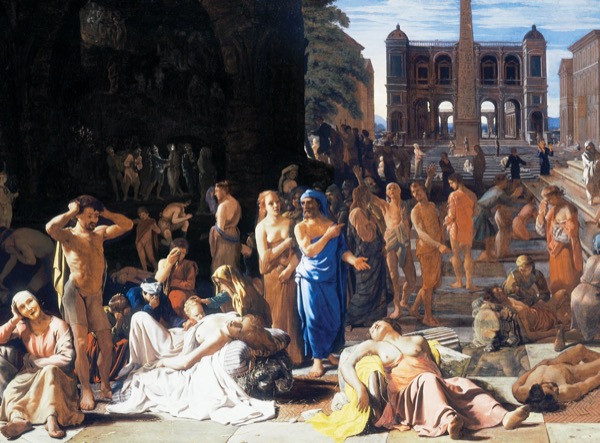 Plague in an Ancient City by Michiel Sweerts, c. 1652.
ADVERTISEMENT

Denial exists not just at the governmental level but also with individual citizens who fear for their lives and livelihoods. We continue to witness evidence of delayed acceptance. China, after a globally criticized effort to hide the 2002 severe acute respiratory syndrome pandemic, once again downplayed and attempted to mask the extent of COVID-19. Other countries, including the United States, only gradually and begrudgingly accepted that a pandemic was looming; governors declined to mandate stay-at-home orders as late as April, despite epidemiological evidence of their benefits. Individuals continue to defy medical advice, choosing to believe the disease is neither as prevalent nor as serious as public health officials declare. Problematically, the longer it takes to recognize and acknowledge the presence of a pandemic, the greater the difficulty with controlling the disease.

Viewed historically, pandemics wax and wane. In the immediacy of the attack, however, potentially affected countries and people who have never experienced these events in their lifetimes lack this perspective and respond with the most human of behaviors: irrational panic. This hysteria has led to the almost absurd run on toilet paper, for a disease that rarely causes diarrhea. More commonly, it leads to flight. From Boccaccio’s “The Decameron,” set in 1348 Florence, Italy; to the 1665 Great Plague in London; to cholera infecting New York in 1832; to the coronavirus today, people—mostly the wealthy—have tended to flee cities for the surrounding countryside, presuming the lower population density and bucolic environs will protect them from the scourge. More concerningly, pandemics foster xenophobia. Fearing outsiders spreading disease led to the widespread massacre of Jewish people in 14th-century Europe, exclusion of Italian and Irish immigrants from the United States in the 19th century due to concerns of cholera and typhoid, and recently, scapegoating Asian people for the coronavirus.

While a portion of the population will always respond illogically, composed, purposeful leadership can have a significant impact on calming the masses, restoring order and providing hope. Here, the rapid proliferation of information available in 2020 distinguishes COVID-19 from its predecessors. Never before have those in authority had the ability to reach, almost instantly, the entire population. Never before have people had such immediate and in-depth access to information about the disease, enabling, in theory, rational decision making. Yet, this instant, mass communication is a double-edged sword, as misinformation and false doctrines can proliferate with equal rapidity. The challenges of the information age became obvious in the last few years; COVID-19 has only reinforced both the advantages and perils of an online world.

Eventually, society strives to decipher the underlying cause of the scourge it is experiencing. Historically, multiple, often contradictory, explanations have arisen. Diseases can be sent from god(s), result from environmental conditions, originate from outsiders, be due to the misalignment of celestial bodies, or be caused by germs. These explanations reflect prevailing sociocultural–scientific beliefs of the time. In the 21st century, a biomedical model predominates, with access to scientific tools and techniques unimaginable even a century ago. Whereas it took scientists until 1933 to identify the causative agent of the 1918 flu pandemic, Chinese scientists defined the entire DNA code of the coronavirus by January 2020, only weeks after the first documented case in Hubei Province. Despite this biomedical focus, alternative explanations remain common. As recently as the late 20th century, multiple—albeit mostly fringe—sources proclaimed HIV/AIDS was God’s punishment for “immoral” behavior.

These explanatory models powerfully shape the approach to epidemics. If God caused the disease, then praying to God might end it, hence the groups of flagellants peregrinating around Europe in the 14th century. Environmental etiologies led to the drainage of swamps, razing “unsanitary” districts, and perfuming streets. Debates raged in the 18th and 19th centuries over whether diseases like malaria, cholera and yellow fever were contagious, and societies elected to erect cordon sanitaire accordingly. More recently, belief in biomedicine has led to an international research enterprise laboring to find a cure or vaccine, although historically such successes usually follow the natural waning of these pandemics.

Despite extraordinary developments in science over the last few millennia, medicine still has strikingly little to offer to suffering patients. Like the medieval caregivers confronting the Black Death or the early 20th-century physicians combating influenza, doctors in the 21st century provide mostly supportive care and proffer public health solutions, like quarantines, that date back to the 14th century. In times like these, that venerated adage lifted from a tombstone of an unknown 15th-century French surgeon resonates ever more profoundly: “to cure—sometimes; to comfort—often; to care—always.”

Eventually, all pandemics end, usually not with a bang but with a whimper. The number of cases dwindles and restrictions like travel bans and stay-at-home orders are lifted. Funerals for those who died can finally take place; memorials to victims are commemorated; and eventually society returns to normal. Memories of the pandemic fade, resulting in the same complacency that contributed to the spread of disease initially.

Like the Plague of Athens, the Black Death and the 1918 Spanish flu, COVID-19 will pass.

But as long as humans densely crowd together in cities and travel the world by the millions, another pandemic will arise. Many of the lessons and much of the preparedness that result from COVID-19 will be forgotten before the next one appears. Undoubtedly, politicians and health care leaders will speak grandly about “preparatory measures” and “matÉriel stockpiled,” but if history is any guide, they will not be able to maintain that momentum for the years—likely decades—that intervene between major pandemics. Local politics, global economics, seemingly more pressing needs, sheer convenience and false alarms—like the 1976 swine flu scare—will conspire to deplete the energy, money and motivation needed to maintain these resources. Although perhaps a depressing conclusion, it is realistic, based on human nature, verified by thousands of years of history.

If equipment will not be stockpiled and behaviors do not permanently change, then let us at least archive the knowledge derived from this tragedy, as organizations like the National Library of Medicine and American Association for the History of Medicine are actively doing. Let us capitalize on advances in virology, telehealth and regulatory changes that the coronavirus has stimulated. Let us support scholarship and events, like those associated with the 100-year anniversary of the 1918 Spanish flu pandemic, that will continue to remind us of the challenges these diseases present to society and what measures successfully managed them. And let us hope that when the next pandemic arrives, the world is better equipped and more clear-eyed about the course and consequences of such a disease and the interventions necessary to stymie its course.

Alfred W. Crosby AW. America’s Forgotten Pandemic: The Influenza of 1918. Cambridge University Press; 2003. See this source for one of the most informative histories of the flu. Frank Snowden, a professor emeritus of history at Yale University, in New Haven, Conn., offers a free online course on the history of pandemics in Western society, available at https://oyc.yale.edu/ history/ hist-234