The Importance of Adequate Debridement

To begin, it is important to differentiate between cleansing, irrigation and disinfection in distinction to debridement. All of these are important components in the care of acute and chronic wounds. Cleansing is usually taken to mean simply using fluid(s) to remove adherent materials and nonviable tissue from the wound and wound bed. Irrigation is defined as using fluids to clean and treat the wound, usually distinguished as low pressure (bulb syringe); intermediate pressure, using a syringe with a gel catheter or blunt needle; or even high pressure, as seen with motorized or pulsed lavage systems.

Either of these two aforementioned methods can use varying types of fluids based on the desired response and need of the particular wound bed. Disinfection comes into consideration when wounds are known or presumed to contain significant biofilm and bioburden, which necessitates using antiseptic agents and antimicrobial agents along with removal of devitalized tissue where the microorganisms live and thrive on the necrotic material.

Debridement is defined generally and medically as “surgical removal of foreign matter and dead tissue from a wound; [the] removal of dead or contaminated tissue and foreign matter from a wound, especially by excision.”1 There are multiple types of debridement that can be used, and these are critical in transitioning the chronic wound which is stalled in the inflammatory phase through all of the phases of wound healing to a fully epithelialized healed wound.

The most commonly used types of debridement in clinical practice include:

Some therapies are combined or blended modalities from the above list and others combine them independently to achieve optimal clinical results.

The time-tested and most efficient method is debridement with surgical instruments (scalpel, scissors, dermatomes, sharp curettes, bone rongeurs, forceps). This is not always practical based on the wound site and the location for the debridement (office, wound care clinic, nursing home or OR).2 Hydrosurgical debridement can be accomplished with a variety of commercially available devices (Table). These devices allow for use of pressurized fluid that actually can cut and remove tissue at various depths based on the settings used. 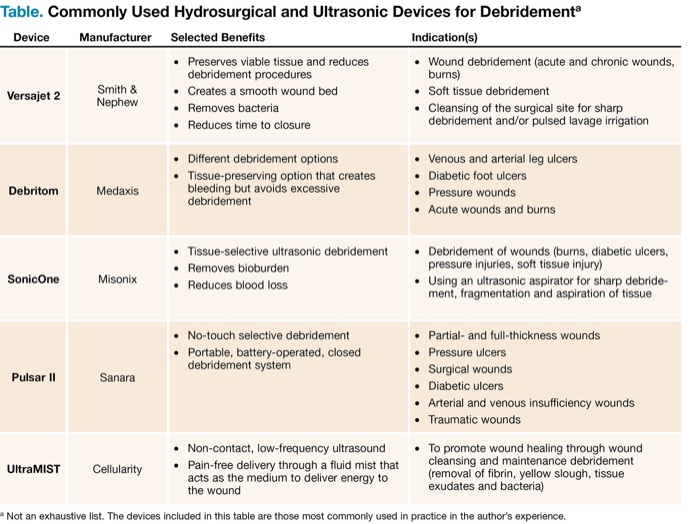 Wound Debridement in the Literature

Multiple studies in the literature demonstrate that the frequency and extent of adequate debridement leads to more rapid wound healing. Clinical judgment and experience lead to the knowledge of “how much to debride” so that vital tissue is not removed. General principles of this practice include removal of all grossly necrotic tissue as well as removal of tissue down to healthy-appearing tissue with visible signs of bleeding signifying adequate blood supply.

This process was studied in chronic venous leg ulcers and diabetic foot ulcer wounds by Cardinal et al, in 2009. and their results suggested that frequent debridement of these types of wounds may increase wound healing and closure rates.3 Wilcox et al, in 2013, retrospectively studied the frequency of debridement and time to healing in 312,744 wounds. This four-year study in 525 wound care centers showed that only 70.8% of wounds healed with debridement alone. Further, they concluded that the more frequently wounds were debrided, the better was the healing outcome. Gordon et al espoused a contrary view in 2012, noting that the rationale is valid for the debridement of diabetic foot ulcers, but finding insufficient data supporting debridement for venous ulcers and pressure ulcers.4 A similar conclusion was reached by the Cochrane review performed by Gethin et al, in 2015.5 These investigators concluded that there is limited evidence to indicate that repetitive debridement of venous leg ulcers has a clinically significant impact on wound healing. Further critiques included the small number of participants, low number of studies, and lack of meta-analysis which precluded any strong conclusions for the benefit of debridement in these types of wounds.

Debridement is a time-honored method that still has immense value for patients with acute and chronic wounds. When performed correctly and with appropriate frequency, debridement clearly leads to increased healing rates and closure in most types of wounds. Care needs to be taken, however, to clearly define the type of wound being cared for to ensure that the appropriate adjunctive methods are used in special wounds like venous ulcers or pyoderma gangrenosum.